The Russian Federation (Russian: Российская Федерация, Rossiyskaya Federatsiya), or just Russia (Russian: Россия, Rossiya), is a country located on Eurasia that has been the focal point for Rise of the Reds since the first version was released.

Russia focuses on heavy tanks, powerful weapons and a strong army to defeat their enemies.

The Russian Federation has had a tumultuous history. During the Cold War it was ruled by the Union of Soviet Socialist Republics, and following its collapse found itself in an economic crisis. Escaping it, Russia was antagonized by the west for many years before they turned their eyes elsewhere, but Russia didn't prosper. For many years, the Kremlin was occupied by what was described by the opposition as a 'post-Soviet oligarchy', who only steered the Federation in the wrong direction and had done nothing to improve the situation. It was soon time to change.

When the Global War on Terror erupted, the Russian Federation promised the People's Republic of China and United States of America that it would fight the terrorists the best it could. However, the government had other plans. It had not yet let go of the antagonization the West had on Russia, and still distrusted them. In an attempt to loosen America's influence in the Middle East, Russia - in secret - sold weapons and advanced equipment to the Global Liberation Army, who were fighting the Americans and their allies furiously. However, it was not long until word of this got out.

An operation undertaken in 2024 by US special forces revealed Russia's export of arms to the terrorists in northern Iran, and the population was outraged. People rallied in the streets in Moscow, demanding the old and ineffectual government to step down. The leader of the opposition, Nikolai Suvorov, was infuriated and took drastic measures to ensure the ruling cabinet was deposed. Russia of course denied this, and tried to secure their anti-GLA stance by mounting an ineffective assault on the captured Baikonur cosmodrome, and failing to destroy a chemical research facility on the foot of Mount Elbrus. Nobody was convinced.

The campaign to end the oligarchy ran for years, until it reached it's boiling point in 2028 when a large crowd of protestors were attacked by riot police in the Red Square. Suvorov contacted the commander of the local military garrison, and managed to gain his support. Riding atop a BMP armored transport, Suvorov and his supporters stormed the barricaded Kremlin and forced the corrupt President to step down, but he refused. There was a brief shootout, ending with the President dead on the floor. Soon thereafter, Russia held new elections and an overwhelming amount voted for Suvorov to take office.

Suvorov had a difficult task; he had to steer Russia's economy in the right direction after the economic bubble cracked several years before. In the same year as the revolution, the GLA ravaged the economic heart of Europe and ruined her economy. China and the Eurasian Unity League rebuilt Europe, and with the billions of renminbi lent, the new European Continental Alliance bought thousands of liters of natural gas and oil from Russia's vast storage. Thanks to this, Russia went through an economic boom and became once again one of the richest countries in the world. New factories brought millions of new jobs, and Russia was able to reconnect with the countries of Eastern Europe and the Balkans, snubbed by the ECA.

In 2036, there was a brief civil war between the pro-ECA West and pro-Russia East in Ukraine. What became known as the Ukrainian Civil War did not last long as the ECA refused to aid the country and Russia intervened to success, although one of Suvorov's most esteemed generals - Leonid Zhukov - lost his son in one of the war's last pointless battles.

In 2037 ECA initiated Operation 'Nemesis', which started the African Resource Rush. Russia was able to connect with the East African Confederation and secured an alliance, along with Madagascar and South Sudan. The Global Liberation Army, which had retreated to Central Africa following Nemesis, began harassing Russian forces in the border regions. Eventually, public opinion of Russia in the East African Confederation began to diminish.

Meanwhile, Suvorov's favorite general, one Nikita Aleksandr, had established a research facility on the border with Sudan near Kurmuk, South Sudan. China and America believed it to be a nuclear missile facility and were outraged, and created the Pacific Peace Alliance as an attempt to undermine Russian influence in Africa. They mounted an attack on the facility, but failed tremendously because of Aleksandr and his Shock Divisions. Suvorov already had problems with the GLA, and so he did not declare war to everyone's relief.

Because of the Battle of Kurmuk, the GLA started attacking Russian positions, believing they were weakened. Meanwhile, the East African Confederation could no longer sustain their partnership and broke off their alliance with Russia. Outpost Molotok, commanded by Spetsnaz General Yevgeny Orlov, was besieged by the GLA before being rescued by General Aleksandr's forces. Orlov was promised support by ECA General Wolfgang von Kuerten, but his forces never arrived, which started a long and bitter relationship between Russia and Europe. Soon thereafter, Russia was forced to retreat from Africa entirely.

In 2039, ECA also launched their Solaris project, making the entire continent self-sustaining and stopped importing gas and petroleum from Russia. Suvorov was losing support, and openly called the Solaris project as a weapon of war. While they managed to secure a partnership with the South American Pact, things looked dire. In 2044, Russia suffered its hottest summer in modern history, with many wildfires destroying a whole year's worth of crops. Suvorov blamed the ECA and their Solaris weapon as causing the wildfires, and the President was soon out of options. In 2045, with public support declining, their disaster in Africa and antagonizing from the west yet again, Suvorov declared war on the European Continental Alliance. Only time will tell what this does for the Russian Federation. 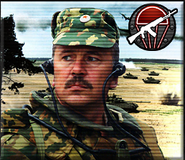 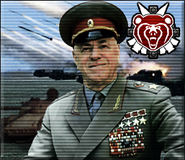 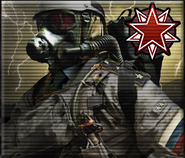 Retrieved from "https://generalsrotr.fandom.com/wiki/Russian_Federation?oldid=36106"
Community content is available under CC-BY-SA unless otherwise noted.