The Global Liberation Army, or GLA, is a terrorist organization operating from Central Africa. It was added in version 1.7 of Rise of the Reds, and focuses on high-speed guerilla warfare, toxic weapons, stealth tactics and salvage technologies.

War is usually a conflict between two or more sovereign nations fighting over territory, resources, politics,religious or greed. During the Cold War however, conflicts involving non-state actors (i.e. armies with no permanent territory) became more and more common. The Viet Cong, Afghan Mujahedeen, terror organizations like al-Qaeda and Boko Haram; war was now fought between nations and organizations. One of those organizations would evolve into the world's most dangerous terrorist army and exceed every prediction about terror armies ever made.

In the 2010s, there were several terrorists who shared a vision of a world without imperialism: Mohmar 'Deathstrike', who lead a band of Kazakh militants; Abdul bin Yusuuf, leader of the Brotherhood of the White Falcon, Anwar Sulaymaan, a notorious arms dealer in Iraq, and Tahar Ibrahiim, a Frenchman with a venomous hatred for the 1%. In 2017, the countries Kyrgyzstan and Tajikistan were forced to unite and formed Aldastan, against heavy opposition from the people and world at large. Mohmar saw this as the final nail in the coffin. He rallied thousands, maybe millions of people from Kazakhstan and Central Asia and united them under the banner of the so-called Global Liberation Army. Yusuuf made contact and provided his support in the Middle East, and weapons were delivered by Anwar Sulaymaan and Dr. Thrax, a biochemist.

As the majority of the world's lower class was in a state of despair, many swore their allegiance to the GLA. While not taking any oath, the GLA emblem soon became widespread across Afro-Eurasia and even the Americas. Attempts to create a global revolution has been attempted many times, but this time, it actually seemed to work. With support from a Chinese defector named Ismail Khan, the GLA infiltrated China and smuggled a 5-kiloton nuclear warhead into Beijing in 2019. Their grand entry consisted of blowing up central Beijing with an atomic blast, obliterating their leadership and millions of civilians. The Global War on Terror had begun.

It was just as Mohmar had planned. China, the United States and Europe all pooled resources into fighting their global incursion. Recruiting members through social media, supporters of the GLA appeared all over the world but primarily in Europe and the Middle East. Mohmar never expected to win the war, but he might just damage his enemies enough to cause drastic change. The Global War on Terror spread throughout the world, with events such as the capture of the Baikonur cosmodrone and launch of two biochemical warheads, the complete collapse of the Middle East as Saudi Arabia and Iran used nukes on each other, and the grand finale: The European insurrection.

Mohmar lost leaders many times and there was heavy infighting in the GLA, especially when he was temporarily put out of command when he was wounded, but they still fought on. In 2028, Mohmar had captured North Africa through a series of bloody revolutions, and was able to smuggle thousands of fighters aboard transport ships. They arrived in Germany, unleashing hell on the already-weakened European heartland. Many GLA supporters took to the streets and assisted in the destruction of Germany. China intervened and drove the GLA back to Hamburg, but Rodall Juhziz, one of Yusuuf's more fanatic commanders, stayed behind to detonate a dirty nuke in the city, destroying it and killing thousands of civilians.

Mohmar had scarred the world like never before. While he lost the war, at large he won. He managed to tear a crack that shifted the geopolitical landscape forever. Mohmar retired and the Global Liberation Army fell into obscurity. Their governments in North Africa served themselves, and GLA commanders betrayed one another. But with Mohmar's death at the hands of an unknown killer in 2032, Anwar Sulaymaan - Mohmar's right-hand man - stepped up to take control. He stamped out any thoughts of rebellion and reorganized the GLA into a proper organization, Yusuuf and Tahar Ibrahiim his most loyal generals. In 2037 however, the new European Continental Alliance took revenge on the GLA by invading and occupying North Africa. Sulaymaan and his army was forced to retreat to Central Africa, where they destroyed the local governments and established their own nation.

Dubbed 'The Zone' and declared Terra nullius by the UN, Sulaymaan dreamed of making a warrior haven with no laws or boundaries. Yusuuf had thoughts of creating a religious empire on the ruins of the Western world, while Ibrahiim dreamed of toppling every capitalism regime from the United States to Japan. Nonetheless, the GLA was now permanently settled in the Congo, and no-one really knows what their next big move might be. 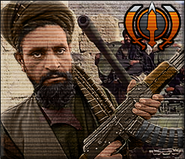 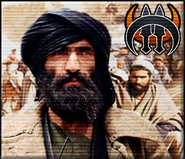 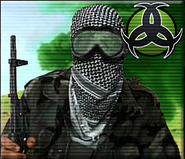