The European Continental Alliance, also referred to as Europe, the Alliance or simply ECA, is a military alliance between several European states.

The ECA was introduced in version 1.8 and focuses on formidable defenses, a variety of of artillery, and prototype systems.

Europe has long tried to stay relevant in the modern world. Following World War II, politics shifted away from the former colonial empires to the new superpowers of the United States and the Soviet Union, with Europe acting as the middle-man. When the USSR collapsed, the already established European Union expanded eastward to incorporate former Warsaw Pact members, much to the chagrin of the new Russian Federation. But the EU still remained under the influence, and as some would say, under the authority of the United States.

Eventually the EU leaders decided enough was enough and that being split apart as separate political entities as they were not going to sustain them in the long term. They were already practically united by the Union, the European Economic Area and the Schengen Area, so plans were made to transform the Union into a du jour super-federation under a single sovereign entity, the Brussels-based central institutions. Instead, secret plans were drawn as polls showed this was not a popular plan.

But the EU leaders did it anyway. The Treaty of Vienna was signed in 2023 that transformed the EU into a single country, and its former nations would over the years be reduced to mere rubber stamps representatives of the new regions in the country. The people of Europe were not happy. While rioting was rather common in modern Europe, it soon escalated out of proportion as people took to the streets, protesting the new oppressive regime. The European Domestic Security Directorate, created by the former German chancellor Juergen Burkhard, cracked down on the protestors in ways reminiscent of the Nazi SS. Several countries descended into civil war, regions broke away from the governments, and the entire British Isles left the Union years before the Hope and Glory Party won the elections.

Then the Global Liberation Army showed up in 2028. They wreaked the entire German infrastructure, ruined the European economy and put a scar on the western world that would last forever. Thankfully, the People's Republic of China showed up and drove the invaders away. In the chaos, the EU's opposition sealed the deal and overthrew many of the governments. The Sixth French Republic was declared, the Dutch royal family took control of the Netherlands, the German four-party 'Europakoalition' was arrested by the Bundeswehr, and the European Union was all but dead.

To help rebuild Europe after the insurrection, China strong-armed a transcontinental hegemony called the Eurasian Unity League. The Europeans received billions of renminbi, which they spent on resources from the resurgent Russian Federation, now led by one Nikolai Suvorov, greatly strengthening Russia's economy. The new European leadership decided that the Union was dead, but they couldn't go back to becoming bickering nation-states in a world of superpowers. Instead they proposed the creation of a multinational alliance, called the European Continental Alliance. It was finally founded in 2034, coinciding with the dissolution of the Unity League (the ECA naturally promised to repay their debt). The countries in Eastern Europe were snubbed by the ECA, blocked out by a 'concrete curtain' built by Willem van der Meer.

Three years later the ECA took revenge on the GLA by initiating Operation Nemesis, invading and liberating North Africa from their clutches. This kickstarted the African Resource Rush that saw the continent chalked up and occupied by foreign powers in a race to control the last rare earth deposits on the planet. The GLA retreated to Central Africa, where they launched several attacks on Russian outposts in Sudan. Russia was forced to retreat, blaming it on the Europeans who failed to come to assistance when General Wolfgang-Maximillian von Kuerten promised to.

In 2039, the European Space Agency launched the first Solaris satellite into orbit and brought their first Solar Reactor in Spain online. This bypassed the ECA's need to import fuel from Russia to power their cities, as a single reactor could power a county and a dozen an entire country. For the alliance's smallest member states, whose gross domestic product were only a fraction of their larger neighbors, this technology was a godsend. Suddenly liberated from their dependence on resources from countries with whom relations had been cool at best, Europe elected to discontinue all purchase of Russian coal and the Middle Eastern oil, which until then had been those countries' most lucrative exports.

This triggered an economic recession in Russia as the exports of coal to European cities was suddenly and indefinitely suspended. The standard of living began to slump as the price of everyday items rose. Things like scooters and bicycles, which had been within the common man's financial reach, became luxury items. Personal vehicles once more became a symbol of the wealthy and connected. Additionally, the summer of 2044 was one of the driest and warmest in the region's history. The spring rain had been abnormally light, and by July the major water sources were dangerously depleted from near constant use, which led to stringent restrictions. Suvorov outright blamed the ECA for using the Solaris technology as a weapon, and hostilities between the two superpowers intensified.

In mid-2045, Russia declared war on the ECA and launched an full scale invasion of the continent. Three immense armies began the westward march from staging points Murmansk and St. Petersburg in the north, Smolensk and Kiev in the center, Odessa and Sevastopol in the south. Spearheaded by Generals Aleksandr, Orlov and Zhukov, the Russians struck with overwhelming force in Scandinavia, the Balkans and Poland, steamrolling European forces and pushing them hundreds of miles westward before finally being temporarily stalled in the Benelux region, which the ECA had flooded as part of a defensive strategy in anticipation of just such an event. General Orlov launched an invasion of England, which was repelled by General Charles Cutting, and Russian forces made it halfway through France before a Pandora nuclear attack put their advance to a halt. Now, with the United States backing them, the ECA are ready to drive the remaining Russians out of Europe for good. 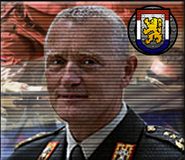 Takes defensive capabilities to an extreme. 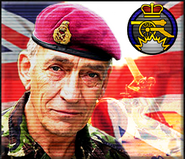 Possesses a greater arsenal of artillery and close air support. 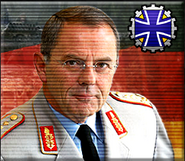 Fields a combination of mobile infantry and fast vehicles.

Retrieved from "https://generalsrotr.fandom.com/wiki/European_Continental_Alliance?oldid=36562"
Community content is available under CC-BY-SA unless otherwise noted.